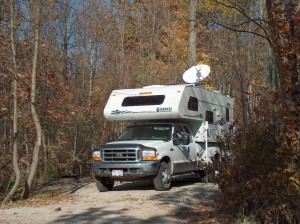 The "drive section" of our RV is a dual-rear-wheel 1999 Ford F-350 SuperCab. It's a lot of pickup, just about the largest you can buy. As anyone who knows my automotive leanings will tell you, I have never been a fan of pickup trucks - I still believe that outdated EPA and NHTSA rules actually encourage people to drive trucks when a car would suit their (and everyone else's) needs better, and I used to look upon behemoths like the one we're now driving with some measure of disgust. But I have always recognized that there are legitimate uses for pickup trucks, and I will be the first to admit that we could not have lived and worked on the road in a Subaru. So we bought a truck.

And I must admit that, at some level, I actually enjoy driving it. I respect any vehicle that does its job well, and let me tell you… if you have a job that needs a pickup truck, you'd be hard pressed to find one more capable than this one. Plus, as I realized soon after we bought it, I now drive a 275HP, turbocharged, 6-speed, full-time 4WD vehicle all the time! Is this great or what?

Getting down to business, here are its vitals:

In summary, it is, as Teresa says, "whacking huge". Problem is, it's not actually huge enough. No, really! With our house on board, we're 2100 pounds (953 kg) over our Gross Vehicle Weight Rating (GVWR) - that's 13300 pounds (6033 kg)! Unfortunately, we were committed to this vehicle before we realized this issue existed. The truck and camper dealers both tell you that it's "plenty of truck" for the camper you're considering, because they both want to make the sale.

Which brings into focus an important point: I believe that the truck camper industry has painted itself into a corner. The various manufacturers are competing on size and amenities, and camper weights have skyrocketed as a result. It's gotten to the point that you cannot buy a large enough pickup to happily carry the larger truck campers on the market - but they keep selling them, and people keep buying them. It's true that you can add various aftermarket components to your truck to make it more manageable with your 5500 pound (2500 kg) camper aboard, things like air springs and heavy-duty shock absorbers. But such "band-aid" solutions don't make it legal, nor do they actually make it safe.

Admittedly, we've gone a little ways down this road ourselves. We didn't feel a need for air springs, as our rear axle's loaded weight of 8720 pounds (3955 kg) is still well under its rated limit, a staggering 9750 pounds (4422 kg). But the original shock absorbers just weren't up to the task of dampening 6¾ tons when it started a-bouncin' and a-swayin', so we've recently upgraded all four corners to Rancho's new 9000x model. They're good shocks, with 9 different settings for different load conditions (like with or without the camper), and they have helped some. But they don't actually increase our GVWR, and when you drive the truck you can still tell it's overloaded.

No, the only real solution is to upgrade the truck itself. And toward that end, we have our eye on a Ford F-550; generally similar to what we currently own, but with a 17500 pound (7938 kg) GVWR, more than enough for our needs. [Incidentally, the next-size-up F-450 still isn't big enough - its GVWR is only 15000 pounds (6804 kg), and with the added weight of the truck itself over our F-350, we'd be right up against that.] The major hurdle to upgrading (apart from purchase price) is that Ford doesn't build an F-550 pickup truck - it's what they call a "chassis cab", meaning that behind the cab, it's a bare frame. The assumption is that trucks at this level are serious work vehicles, and rather than the generic pickup bed, you'll want a body (like a flatbed or tow truck) specialized for the work you'll be doing. But this is no good for carrying a camper; the Lance needs something other than naked frame rails to sit on.

There are a few aftermarket companies building pickup beds for F-550s, such as Centurion. But we realized very early on that what's called a "utility body" would be well suited for our needs: it has an open bed like a pickup that would hold the camper, but would also offer a large amount of much-needed storage space, always an issue with a truck camper. Stock utility bodies won't quite work, we don't think - the dimensions aren't quite right - but we have so far found 2 companies willing to make us a custom body to fit our Lance. If you're interested, they're Douglass and Diamond, both in California.

If we are able to replace the drive section in this way, I hope it will finally make a reality one of our original motivations for fulltiming in a truck camper: the ability to take it far from paved roads. We clearly would have been more comfortable in a conventional motorhome, but our thinking was that it would have prevented us from going to some really fantastic places. For example: one of our all-time favorite campgrounds, Echo Park, is at the bottom of 13 miles (21 km) of rough, steep dirt road. This isn't someplace you can take your typical Class A. The irony is, our F-350 is now so overloaded that we cringe at every seam in the pavement. We could probably get to Echo Park if we went at a snail's pace, but realistically, our 6x6 goes largely unused. My vision is still of building something approaching a real expedition vehicle, but we have a ways to go yet.

I believe that an F-550 is actually the only choice for carrying a large camper like ours. The other two major American automakers both produce a pickup in the same class as our F-350, but neither of them has a significantly higher GVWR than we do. Of the two, Dodge doesn't make anything larger than the 3500, so that immediately lets them out. GM does make larger trucks, but their comparable 5500 doesn't have the pickup-truck cab that an F-550 does; it's significantly taller, too tall to fit under a truck camper. And the same goes for the trucks in this class from the "big truck" manufacturers, like International and Freightliner; they certainly can carry the weight, but they're too tall to put our camper on. No, if you want the modularity and room of a Lance 1121, I'm afraid Ford is it.

And they're not cheap. A new F-550 would likely cost upwards of $40,000, and the utility body might well be $8,000. Then there are still unsolved problems like how to attach the camper to it; stock Happijac tiedowns like we have now won't work. This problem itself might be enough to force us into a pickup-style bed, forgoing the benefits of the utility body. We don't know yet. But the upshot is that it will be a while, if ever, before we're able to make such a move.

For now, though, the F-350 gets us - and our house - around. The PowerStroke diesel has plenty of oomph for our needs, and with the turbo, it performs admirably even on the >12,000-foot (3600 m) passes of the Rockies. [Plus, we both feel that if you're going to have a truck, no sense messing about - get a diesel.] 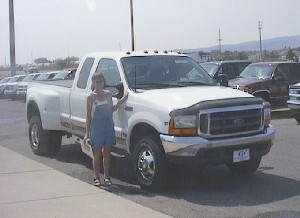 The SuperCab's vestigial back seat is crucial for carrying everything we don't have room for in the camper, from firewood to storm windows in the off-season. And when we do detach the camper (which we're gradually getting better at), the lack of its weight actually makes our truck feel small.

At the end of the day, what it comes down to is this: on June 22, 2002, we went into Grand Junction with the intention of buying something white with six wheels, and that's exactly what we did.

We have a new truck! The F-550 upgrade discussed above actually came off in the fall of 2003; and naturally, I posted the whole long and sordid tale. Overweight no more!