We're at Douglass first thing Monday morning to see our utility body. Excitement levels are rising and we can't help but grin as we look it over, identify a few changes that need making and leave to finish the business with Jim Burke Ford. 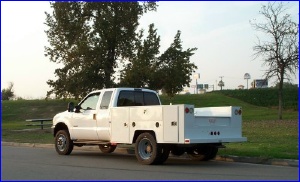 All our previous concerns about how this might work out evaporate. They offer us a reasonable price on the F350 and by the afternoon have organized out of state delivery for the next day! Not only this but they have identified another $1000 rebate, bringing the total to $3500. We feel pleased with how things have worked out and have enjoyed doing business with Jason.

Tuesday morning, we sign the papers and head for the state line and a somewhat surreal experience. The rendezvous and exchange is to take place in the car park of Buffalo Bill's Casino, just inside Nevada. It brings back images of the posse, in hot pursuit, screeching to a halt as the baddies escape over the state line leaving the sheriff and his deputies frustrated on the other side, reined in by the limits of their jurisdiction.

Coming over the last range of Californian hills, the twin casinos straddling the interstate at Primm are visible across the miles of empty desert, nothing else in sight, just the increasingly obvious flashing billboards advertising, food. No mention of dice, cards or slots, nothing so vulgar as money in the form of fortunes to be won, only the price of that American staple, steak.

Bruce who has driven the F550 from California, rings to say he has a Notary Public standing by and we momentarily struggle with the wording, imagining him flagging down a passing car and coming up trumps. We're only five minutes away and arrive to discover that the official is to be found among the security staff in the casino itself. We make our way across the gaming floor to the security desk and after some delay are taken to the dingy little office, where the security manager himself sits, looking and sounding for all the world like Don Corleone. Now I am not trying to suggest that there is any connection what so ever between the Family business and this fine upstanding establishment, it's just that I have an over active imagination and besides which I have no desire for a pair of concrete booties.

The next fifteen minutes are totally bizarre. Don Corleone moves in slow motion to open his Notary ledger and begins to form each letter with excruciating care and precision. His focus is broken by a series of conversations with his assistant and phone calls with his lieutenants. A taxi driver in front of the casino claims to have a man dressed in a hospital gown in his cab. The man in question wants his trousers that he left in his hotel room when he was whisked off to Emergency with a suspected stroke, brought on no doubt by all the excitement. He apparently has no desire for his other belongings, most remarkably, the $150,000 cash he left behind. Security displays no curiosity in the whys and where-fors of this strange situation. Their sole purpose is to return the money, get a receipt and ask no questions. We on the other hand are tickled by this entire drama and come up with numerous scenarios explaining the presence of the greenbacks and the apparent lack of interest on the part of their owner. Finally, the ledger is stamped and sealed and we return to the car park to complete the exchange.

We unload the camper and Sterling backs the new truck into place for the first time. He reports it incredibly easy and it certainly goes quickly and smoothly. We bid farewell to Bruce who drives off in our old truck and I'm ashamed to report that there was no twinge at the parting, unlike when we traded in the Subaru. Not five minutes later we realize we haven't removed the plates from the F350 and manage to catch Bruce on the phone before he sets off on the return journey.

In the middle of all this, I think I've locked my keys in the old truck. Given that Sterling has already exchanged his old key for the new one, we are now stuck with the conundrum of how to break in. Sterling has the bright idea of asking security to open the door for us and they readily agree but we are then sidetracked to the security office to do the paperwork. I open my purse to get ID only to find the keys smiling up at me. The F350 having one last laugh, "You're not getting rid of me that easily!"

As we attach the tie downs other deals are being done. An old battered car with two likely looking lads sidles up beside us. A head and hand emerge from the window, the later holding a bejeweled ring and the quiet voice asks if we'd like to buy a "diamond". Helpfully, they have both his and hers and there is a momentary madness of considering whether we want something truly gaudy and out of character to commemorate this entire event but we come to our senses just in time and the wheels move on to find another potential punter.

We're eventually ready to drive off and Sterling does the honours. Now I have to tell you that I am not one to go into raptures about any vehicle but this new truck of ours is something else. I won't bore you, other than to say it's quiet, it's stable, it doesn't rock and roll on corners or bad road surfaces, the automatic transmission is smooth, responsive and nifty, and it smells like a new car. In short it's everything we hoped for and then a bit more.

There's just one hiccup. Sterling has a suspicion that our lights aren't working properly and ten miles down the road we pull off into another casino car park at Jean. His fears are correct. Douglass have done something very interesting with the wiring. A foot on the brake pedal lights the back of the camper up like Christmas. Every single light comes on. It looks pretty but probably isn't legal. Right and left signals have every single light flashing and we think that this might be confusing to other drivers as we attempt to indicate our intentions. We decide to stay where we are for the night and Sterling says he'll fix them in the morning. I'm always impressed at times like these and of course true to his word, after a couple of hours under the truck the following day, he has them sorted and working. What a hero! He attributes his skills in such matters to Mr. Sponholtz, who taught him electronics during his secondary school. I can only conclude that this teacher made a deep and lasting impression as Sterling's voice could occasionally be heard from underneath the truck, muttering that Mr. Sponholtz would not be pleased with a particular strip or crimp.

We while away some of the evening in the casino, having dinner and a quick whirl on the slots. My early impressions of casinos come from film images of Monte Carlo where the aristocracy and the rich went to play, dressed in their finery and jewels in an atmosphere of sophistication, indulging the urge for a little genteel gambling in exclusive clubs closed to the hoi polloi. The casinos of modern day Nevada are a somewhat different matter, at least the parts of them open to the likes of you and me. There are no windows and no clocks and the whole experience is a little numbing. There is a cacophony of electronic sound, hundreds of slot machines each making their own pitch for your coins. The house kindly supplies what look like empty yoghurt cartons to carry the dosh around while perusing the possibilities, presumably a lucrative sideline for a dairy factory somewhere. It took us a while to get into the whole business but we eventually settled onto the nickel machines, mesmerized for a while by the repetitiveness of the whole experience before boring and cashing in our yoghurt pots.