Reading the log entries, you might be forgiven for thinking that our entire lives are one long holiday and compared with working fulltime and living in a stationary house, things are certainly very different now. For one thing, Sterling's commute is even shorter. Previously he had to negotiate the hallway to reach his office, now he can make it from the bed to his desk in two steps. Whether this is an improvement is debatable. The dinette doesn't quite offer the same work environment that he was used to: huge desk, office chair, sofa, pinball machine and dartboard. On the other hand, the views are often more enthralling. As for myself, I no longer have a paid job and in nearly all respects this is a blessing although I sometimes think my brain might atrophy without the day-to-day challenges. The demands of being a housewifely duty specialist or reinemachefrau don't quite stretch me in the same way, although I will admit that there is comparatively little tension in my life these days and I am definitely a great deal more relaxed. Having said all this I am now going to bore you with the details of our lives over the last few weeks in an attempt to illustrate some of the more mundane, and sometimes challenging aspects, of life on the road.

I am convinced that cars and trucks know when they're about to be traded in and demonstrate their displeasure at being left for a newer model. Since ordering the F550 we have spent a minor fortune and no small amount of excitement and anxiety on our existing steed. First of all the ABS sensor went on one of the wheels and we narrowly missed paying for an entire new hub before being told by another Ford garage that we only needed to replace the sensor itself. This repair took a few days while we waited for parts in the small town of Bishop, California where the most noticeable features were the mural on the police station showing the sheriff dealing with a shoot out at the local saloon, and the bright red British telephone box on the high street. These two amazingly obvious icons of the two cultures had me momentarily confused about my geographical location but a quick consultation with the GPS reassured me.

The second event involved a flat on one of the inner duals, a steep narrow winding mountain road and a certain amount of trepidation. We were quite happily trundling along, pulling off occasionally to let other traffic pass. A couple of times we did this, a jeep drew in behind us and it wasn't until the third such dance that the driver managed to tell us we had a flat. We had no idea although I'm sure it wouldn't have been long before the remaining tire would have given out under the strain. The first challenge was to find a pull-off that was flat enough to risk the entire operation and luckily just half a mile up the road a reasonable area presented itself. Having raised the camper on its legs we were able to jack the truck up and change the wheel with surprisingly little trouble. Our anxiety evaporated and we proceeded on our way chortling at our good fortune. The real excitement came some days later when we took the flat to be fitted with a new valve which it turns out had been our problem. The shop inflated it and we watched with some consternation as a "bubble" appeared and steadily grew in the wall of the tire before exploding with such force that Sterling temporarily lost the hearing in one ear and I did a very good frog impersonation. 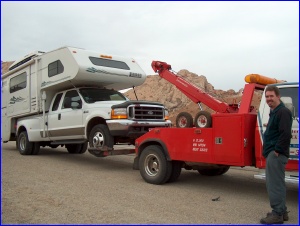 The truck wasn't done with us yet. On the way down a long steep section of I-70, it popped out of gear and would not go back in. We could engage the low range but were then stuck there. Sterling, being the knowledgeable chap he is, proclaimed the transfer case deceased and us in need of a tow vehicle. Again we were remarkably fortunate. We had cell phone coverage, albeit marginal, our insurance company quickly found us a tow company and the nearest town was only thirty miles away. The mechanic confirmed the diagnosis, ordered the part and we were able to leave the following morning even though we were two thousand dollars lighter. Such is life!

In the middle of concerns about the existing truck, the ongoing saga of the new truck and utility body took our attention for nearly a week in Bakersfield. The preliminary measurements had been taken a couple of months previously but now it was time for the fine-tuning. 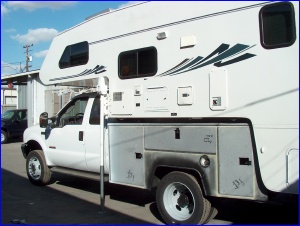 The truck, utility body and camper were put together for the first time and a little like a dress fitting, a few alterations were needed to obtain a perfect fit. As Sterling hinted in the notes section, we were just a little excited at this stage and the whole situation was exacerbated by the tantalising chance that it might all be ready the following week. An RV park in Bakersfield isn't exactly our idea of fun so we went off into Sequoia National Forest for the weekend and returned four days later for another fitting. The carrot of completion was still being dangled but we now had a deadline coming into play. We needed to drive east as Sterling had to be in Denver for business meetings the following week. Douglass promised they'd know one way or the other by Wednesday afternoon and so we decided to wait on the off chance. Luck was not with us on this occasion and we headed east leaving our shiny new combination behind.

While Sterling's work is what keeps us going financially, there are times that it drags us halfway across the country when we'd rather not go. Heading for Colorado in November would not be our first choice and the idea of driving a thousand miles in a couple of days doesn't tend to excite us but the visit coincided with various medical appointments and so we drove rather than fly Sterling out on his own. It was during this journey that the transfer case went, adding a little extra interest to the journey and giving us a night in a truck stop motel.

On the way over the mountains, we stop in Glenwood Springs, our home prior to taking to the road. If and when we return to living in a house glued to the ground, Glenwood is one of the few places that we'd consider: maybe not the town itself but somewhere not too far away, in easy reach of the Springs. The town sits at the confluence of the Colorado and Roaring Fork Rivers nestled in the bottom of the narrow valleys. At this time of year we used to watch Bald Eagles sweeping along the river and during especially cold spells, plates of ice floating by on the water, ferried by currents while the air above swirled with wisps of mist in the early morning. Over the weekend we play at tourists. A visit to the Hot Springs is obligatory and reminds us yet again just how much we miss these wonderful waters.

There are few things more pleasing than sitting in the heat while the air temperature hovers around zero, snowflakes dissolving in the water and accumulating in your hair with the steam rising so thickly that nobody else is visible. Some considerable time later we emerge, a little wrinkled but extremely laid back and content. In the late afternoon we take the recently opened aerial tramway up the mountainside and gaze down as the town begins to twinkle in the fading light and the last rays of the sun catch Mount Sopris in the distance. It is the night of the lunar eclipse and the clear skies give us an uninterrupted view of this mystical event unfurling above the silhouetted valley sides.

As I mentioned, the other incentive for having driven to Colorado was for various medical and dental appointments that as always are not without their excitements and concerns. Our first attempt to leave the state was thwarted in the middle of Utah by a phone call saying we need to return for follow-up on one of the tests. We have to wait a few days for an appointment but luckily we're in easy distance of Arches National Park and so we get a couple of nights there and an afternoons walk around the Devil's Garden. I won't bore you with further rapturous descriptions of the red rocks but will just say that it's as stunning as ever and a wonderful place to while away the time. Luckily our return gives us the all clear and we set off in our second attempt to return to California and arrange delivery of the new truck.

So, to use that well-worn cliché, "Life isn't always a bowl of cherries." We've spent the last three weeks charging half way across the country and back and as Sterling's colleague John would say, a number of "Opportunities to excel" (what the rest of us call problems) have presented themselves along the way.